Even the acrimony surrounding Claudio Marchisio's harsh red card and Luis Suarez's bite on Giorgio
Chiellini's shoulder will not distract from what was frankly an abysmal performance by Italy at this World Cup.  There is very little that is redeemable, and a lot that is regrettable.

After the victory against England, there was premature but palpable optimism of going all the way.  Given England's subsequent performances in their next group games, that optimism proved embarrassingly misplaced.  The English were the true whipping boys of the group, failing to gain even a consolation win against Costa Rica in their final game, and Italy's win against Roy Hodgson's charges in the opener signified very little.

Yet now with all the sums done, it is still hard to comprehend how Italy failed not only to record a victory over Costa Rica or Uruguay, but also to score against them in over three hours of play.

The failure is so comprehensive that it is difficult even to know where to start the inquest.  Cesare Prandelli resigned as coach right after the defeat, and so did federation president Giancarlo Abate.  Gianluigi Buffon and Andrea Pirlo have now played their last World Cup.  Daniele De Rossi is now thirty-one.  And the successors? Mattia De Sciglio, Marco Verratti and Lorenzo Insigne are all promising but are not yet world class.  This transition will be painful and will require a radical reimagining.

Buffon dubbed the exit as "deserved," while De Rossi said that "real men need to play in the national team, not Panini stickers or characters," referring to Mario Balotelli's most recent gag.  Sure, the latter's opinion was clunky in expression, but he was transparently frustrated at the lack of tenacity from players who were, we were told, fine-tuned for the occasion.

And we may as well talk about Balotelli, who ghosted in and out of the tournament, bristling and collapsing from the slightest touches.  There are no excuses to be made anymore for the less-than-super Mario.   His movement, his touches, and his conduct are absolutely unacceptable.

There are only criticisms for Italy, unfortunately.  From the starters to the substitutes to the coach, this was a colossal failure.  Prandelli changed his line-up in all three games, but he made no impact.  His meddling was symptomatic more of panic than a plan.

"I take responsibility for the failure of this technical project," said Prandelli with his usual disarming grace. Indeed, the project unraveled in the worst possible way in the Brazilian heat.  It was as if these players had not played with each other ever.  The project's failure will hopefully prompt the clubs to cooperate more with the national team coach, something that Prandelli had been demanding for a while.  For now, there is only uncertainty.

Given that Serie A is also struggling in Europe, the questions facing Italian football are complicated and innumerable.
Posted by Hasan S at 21:33 1 comments

Beat Costa Rica tomorrow and book a place in the round of sixteen.  Seems easy, but Italy over the
recent years have had a habit of dramatically self-destructing in their second group stage game.

Take World Cup 2002.  Italy had swept aside Ecuador in their opening fixture 2-0 with two blistering goals from Christian Vieri.  Against Croatia in the next game, a draw would have been an acceptable result.  It started well enough when Vieri (who else?) put Italy in the lead via a looping header.  However, scandalous refereeing that saw two perfectly good Italian goals ruled out and a spirited resurgence from Croatia ensured Italy lost 2-1.  Italy barely made it into the next round after Alessandro Del Piero salvaged a point against Mexico in the final group game and Ecuador unexpectedly beat Croatia.

Two years later, Euro2004 was to prove similarly tortuous.  Italy's first game against Denmark had ended 0-0, and they needed to beat Sweden to maintain some purchase on the group.  All seemed to be going to plan when Antonio Cassano headed them into the lead before half-time.  However, five minutes from time Zlatan Ibrahimovic scored a preternatural back-heel goal, which meant a 2-2 or higher score draw between Denmark and Sweden would render Italy's last group game against Bulgaria meaningless.  The 2-2 infamously materialized, and Italy were sent crashing out despite a 2-1 win over Bulgaria.

Even Italy's victorious World Cup 2006 campaign featured a farcical 1-1 draw against the United States.  Italy beat Ghana 2-0 in their opener but their second game against the United States encapsulated their schizophrenic nature perfectly.  After taking the lead through Alberto Gilardino, Italy magnificently collapsed.  First, Cristian Zaccardo scored an own-goal (the only goal Italy conceded from open play during the entire tournament) and then Daniele De Rossi decided to confirm the misery by elbowing Brian McBride and drawing blood and a red card.  Within minutes, Italy had squandered their advantage, and made their final group game against the Czech Republic much more complicated than necessary.

Though Italy started Euro2008 with a disastrous 3-0 loss to Holland, their second group stage game against Romania should have galvanized them.  However, they fumbled their way to a 1-1 draw, needing Gianluigi Buffon to save a penalty to keep them in the tournament.  In the next game, they defeated France 2-0 to go through, but could have avoided that do-or-die situation.

Italy's World Cup 2010 performance was a total shambles so is barely worth mentioning.  However, in Euro2012 the accursed second game came back to haunt Italy again.  After drawing Spain impressively in their opening game, Italy could only draw Croatia in the second group stage game even after an Andrea Pirlo goal courtesy of a free-kick.  The 1-1 result meant Italy needed to count on Spain and Croatia not drawing 2-2 or higher--an eerie repeat of Euro2004.  Luckily, Italy beat Ireland, and Spain beat Croatia, meaning Spain and Italy went through to the next round.

Tomorrow, against Costa Rica, Cesare Prandelli's Italy are favourites by a huge margin, but are being cautious.  Daniele De Rossi has already opined that the game will be Italy's "most difficult" of the group stage, not least because it will be played at 1pm in the Recife heat.  Italy played Japan in the Confederations Cup last summer in the same venue, and they remember the airless surroundings acutely well.

However, the weather can be no excuse.  After Uruguay's win over England today, Italy have a prime opportunity to seal progression, and to avoid the final-day drama they have become so accustomed to over the last decade.  Here's hoping for a convincing win. 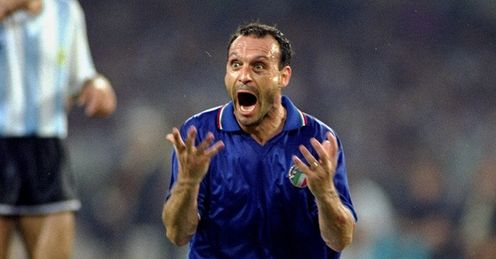 Salvatore Schillaci exults after he scores against Argentina (1990 SF) 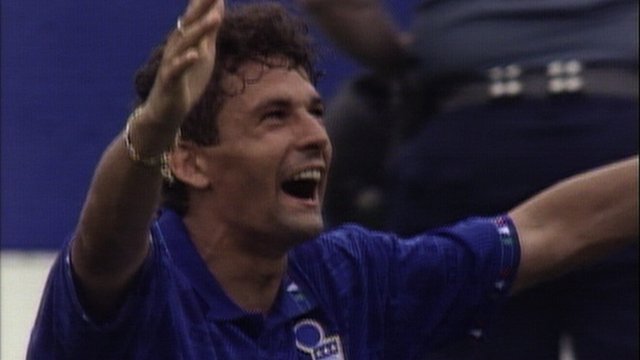 Baggio after scoring the winner against Spain (1994 QF)

Del Piero celebrates his late equalizer against Mexico (2002 First Round)

Grosso (right) disintegrates in ecstasy after scoring against Germany (2006 SF)
﻿ 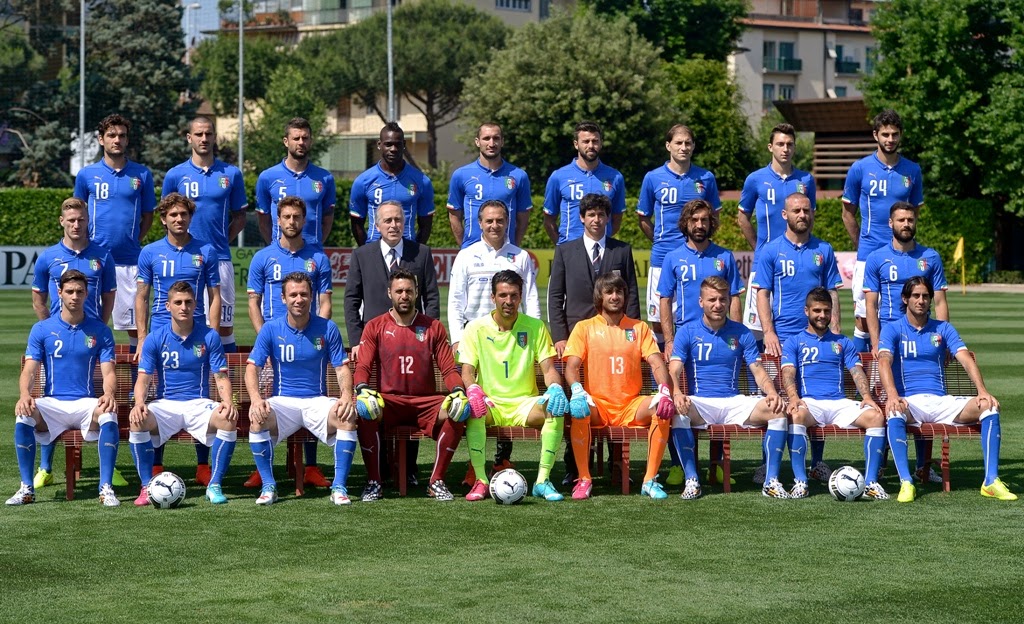