Dreams Of A Milanista Past The Half 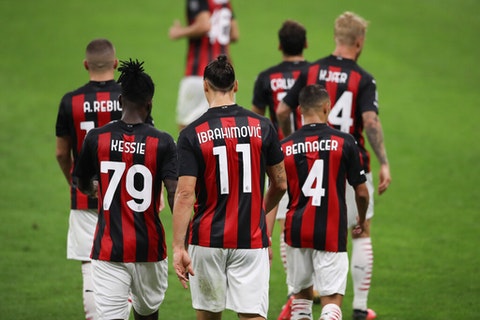 There comes a time when you have no choice but to share your dream.  After twenty rounds, Milan still sit, somehow, at the top.  They did so after nineteen rounds as well, at the halfway point of the season, but I daren't have written this then, even though I had dared to dream much earlier.  The podium for the Winter Champions is laid down only in discourse, and after a bruising 3-0 defeat to Atalanta in the nineteenth round the title felt emptier than usual.

I had been anxious before the game against Bologna this past Saturday.  I feared it would defy what was on paper, all of Milan's work so far would falter in front of the heaving beast that is The Narrative, which has maintained that Milan are, at best, a third-wheel: Inter and Juventus have the better squads and over time it will tell.  The twentieth game, the start of the return fixtures, would show that the first half of the season had been a dream, a madman's dream, and in the second half Milan would find themselves in someone else's, walled out as the familiar Juventus cavalcade moved triumphantly ahead in the distance.

In these times, dreams compensate more than usual.  This Serie A season will be unwitnessed by fans in the flesh.  It will be asterisked for posterity as a perversion.  The noise of fans in stadia has been replaced by howls of players clipped in flight, the pantomime of a coach's protest by his bellowing--and it is on this stage that Milan have emerged as contenders.

In a way it's fitting.  Milan's owners Elliott are used to surveying carnage before finding a position of advantage.  As the pandemic rages, Milan inoculates itself against financial and sporting ruin.  The wage bill has been slashed, players surplus to requirements have been moved on, there is no debt owed to banks, the fanatical line of buying only young players has been moderated to include old hands like Zlatan Ibrahimovic and Simon Kjaer, and a whole department dedicated to precise statistical analysis offers directors Paolo Maldini and Frederic Massara profiles that they then pursue in the market.

The result is that a team with one of the youngest average ages in Europe sits on top of a league that has always been suspicious of too much youth. Now, though, the suspicions have been momentarily diverted.

If this had been a normal season, Milan's young players would have disintegrated under the pressure of a packed San Siro, some say. If they hadn't been awarded all of their penalties, they would sit third at best, often the same people say.

The first can't be proven; the second is tenuous, not even taken seriously by honest Inter or Juventus supporting journalists.

No one can argue with the math, so they argue with the method.  Coach Stefano Pioli faces the snide line of questioning with customary grace, swatting away questions of penalties, reminding them that a team which has been sweeping almost all before them since July of last year isn't here by chance.  They have earned the points and the penalties (note: all but maybe two of Milan's fourteen penalties were blatant).

Supporting Milan isn't exactly a martyr's fate.  The fanbase of a club that has won the European Cup seven times and the league almost three times that forfeits the right to complain of lean years.  But in the interregnum between 2014 and now, when Milan didn't have the towering leadership of Ibrahimovic or the business stability, there was almost nothing to surrender at the halfway point.  Milan were almost always realistically out of contention for a Champions League spot after nineteen rounds, let alone the Scudetto.

It feels strange as a Milan fan to have something at stake this far in the season.  To ease the pressure, the line publicly remains that finishing in the top four is the season's goal, but the editorial lines have already converged across Italian media.  Papers and podcasts of all political colour agree that Milan are among the favourites.

What you fear as a fan is the dream, preferring to defer it.  We'll see where we are after ten rounds, you said at the start of the season.  At round ten, you said fifteen.  At fifteen, nineteen.

You fear something ghostly, which periodically assumes contours: a disproportionate amount of injuries, COVID-19 cases that have reduced your key players to posting Instagram videos of themselves on stationary bikes at home, and the recent spat between Inter's Romelo Lukaku and Ibrahimovic during the Coppa Italia.

At first glance the spat had all the hallmarks of how footballers square up--like rams they touch heads, sometimes falling, sometimes keeping their balance and at least some dignity, as was the case here. But without the noise of the fans drowning out the verbal exchange you heard everything.

No need to rehash it further, but the (non) issue has been typically exaggerated in the Italian media, and the talk of a ban on both (possibly extending into the league) strikes at that part of you that has started to believe.

That belief has been steadily building, collapsing, rebuilding, resurrecting itself again and again.  For every slip, there is a wonder Rafael Leao goal (one of which was the fastest to have ever been scored across Europe's top five leagues); for every story that heaps doubt on the club, there is one that heaps praise.  Milan's season has bloomed during a time of disease, and it therefore feels like a full-blooded rebirth.

Davide Calabria, Theo Hernandez, Franck Kessie, Ismael Bennacer, Ante Rebic, and the man who always supplies the key, Hakan Calhanoglu--there is so much to look forward to at last.

For now, you tell yourself what they tell you: finish in the Champions League places.  But the January window that added a player like Mario Mandzukic (among others) tells you something else.

Hopeful, you look towards May, still a flicker in the distance.